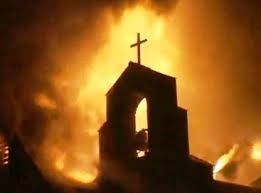 Father Lewis likes to walk around the neighborhood, like a Doctor making his rounds in a hospital.  He was a spiritual Doctor, a Sheppard tending to his flock.
He visits those that may have missed Mass or seem like they need a little personal attention.  Those that hang out on the street see Father Lewis on a daily basis.
Today he visited Mrs. Ramirez at work.  The Ramirez family owned a small corner store.  Bills were beginning to pile up which forced the Ramirez’s to open their store on Sundays.
Father Lewis figured if they couldn’t come to church he would bring the church to them.  Today’s visit went well.
His stomach began to growl.  It was almost lunch time and he had missed breakfast this morning.  Mrs. Ramirez had offered Father Lewis a large beef and bean burrito and it was his policy to never refuse food from his congregation.
Sitting at his desk in the back of St. Augustine Church he began to wish he had refused.  Now he had a bad case of gas.
Father Andrews and Father Smith had found this funny.  Even as grown men of the cloth, farts still made them laugh.
As time passed, the gas grew worse.  The farts got more intense.  The smell was bad.  Soon Father Lewis found himself alone in his office.
Three P.M. rolled around and it was time for Father Lewis to sit in the confessional.  He left his office and made his way toward the confessional.  He stopped to light a candle for every member of the congregation he visited this morning, fifteen candles in all.
He said a quick prayer and stood to leave.  As he turned away from the candles a gush of wind escaped his backside.  The sudden rush of gas hitting the candles caused the flames to flare up into a mini mushroom cloud.
Father Lewis turned to face the flame as in an instant they jumped onto the drapes, catching them on fire.  The fire spread quickly up the drapes.  As the flame reached the top it spread in both directions along the cloth lining the walls.
In less than a minute the drapes surrounding the church were on fire.  Father Lewis stood there in disbelief.  He had started the fire with a fart.
Father Smith stepped out of the confessional and seen the fire.  Quickly he rushed over to Father Lewis and pulled him toward the back of the church, away from the fire.  Father Andrew was holding a door open for them as he called the fire department from his cell phone.
It did not take long before the rafters in the ceiling caught fire.  The church was being burning down to the ground by a burrito.  Father Lewis began to cry.
Posted by Max M. Power