There's a lot of talk about Alton Sterling being shot by the police. Was he murdered or was it justified? From what I've seen and I'm speaking from personal experience, this was justified.
Shortly after Hurricane Katrina Houston was flooded with New Orleans refugees. A lot of the criminal element came as well, turning some parts of Houston into a literal war zone.
I am a Commission Security Officer in the state of Texas and at the time I was working for Blue Moon Security, a company who thought they were a private police force. I, however, did not follow orders well, because I would have to remind my fellow officers that we are SECURITY and not police officers.
I was assigned to one of these war zones and on my second night there we had a bad encounter.
My supervisor, a former police officer who had been fired from his department, showed up to walk around with my partner and myself. We went straight to one of the "hot spots" and sure enough a local dealer was dealing.
The dealer knew that if he stood on the street then he wasn't on our property and legally we couldn't arrest him. This little detail escaped my partner and supervisor.
They stepped into the street and stood on both sides of him, with me staying on property, blocking him from coming onto our property.
Words were exchanged, tempers flared up by all three of them, and an audience was beginning to form.
"Sarge, he's not coming on property, let's just call the cops and report him so we can keep patrolling."
My request fell on deaf ears. The dealer shoulder checked my partner as he attempted to walk away and the fight was on.
My supervisor joined in, trying to take the dealer to the ground. I seen someone else start toward the three and I blocked him.
"Everyone stay back," I shouted as the three fell to the ground, rolling around in the street.
The rolled to the other side of the street and I walked over, watching like a wrestling referee, making sure no one else jumped in.
I was not going to get involved because these idiots over stepped their boundaries. But I also wasn't going to let something bad happened to them either.
I saw something that made me end the fight. I pulled my gun and put it to the dealer's head and shouted, "Don't fuckin move, drop it!"
Everyone froze and my supervisor said to put my gun away but I held it to his head and yelled, "I said drop it!"
At that point the dealer opened his hand and my partner's gun fell to the ground. During the struggle he was able to grab the handle and pulled the gun almost all the way out and my partner or supervisor didn't know it.
The point is he was pinned to the ground but his arm was still free enough to grab a gun. I'm thankful I didn't have to pull the trigger.
Just because someone is pinned to the ground on his back doesn't mean he is subdued. He was a threat and could have killed both officers. The same is true of Alton Sterling. It's easy to judge from the comfort of your cell phone but having been in this situation I can say it's not always so cut and dry.
Posted by Max M. Power No comments: 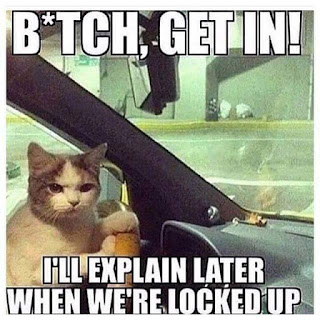 That’s how it all started, I got in, no questions asked.  When you trust a friend with your life you tend not to ask questions until it’s too late.
I got into the passenger seat, laughing to myself, thinking this was a prank.  The tires screaming as they spun in place before throwing us forward told me otherwise.
“Hey man,” I shouted in protest and fear, yanking my foot completely in before the doors slammed itself shut.  “What’s going on?”
“No time to explain,” he said, staring at the road ahead of us.  He yanked the wheel quickly, not losing any speed, turning so hard I was thrown into my door with a hard thump.  “Seatbelt,” is all he said as he tried to correct the car, keeping us from rolling over.
I quickly yanked my seatbelt down and snapped it into place.  I braced myself as the next turn was coming.
“You got your gun on you?”
“Of course,” I grunted through clenched teeth as he made the turn.
“Superman or Reba?”
“Superman,” I answered, bracing myself for the final turn out of the neighborhood.  Seeing the light for the main road was still red my heart began to beat faster.
“Slow down,” I shouted, “slow down!”
He made the turn, narrowly missing the two vehicles crisscrossing the intersection.  Horns were honked but we were gone.
“Sit back down,” he said, looking over at me.
I was bracing for an impact to the point I was half way standing up in my seat.
“You want to tell me what the fuck is going on,” I said, panic filling my voice.
He motioned to the back seat with a nod of his head.
“It’s play time.”
Looking in the back seat I seen an AK-47 and an AR-15.  There was a box with spare magazines and three boxes of ammunition for each.
“Load up,” he said as he honked his horn, letting other drivers know he was plowing through another red light.
“What happened,” I asked, more shocked than anything else.
“Just load up and don’t distract me.”
I seen the highway coming up and from the lane we were in it looked like we were able to head south.  Everything bad always happens south.
“Fine,” I said, reaching for the box and pulling it to the front, resting it on my lap.  “But I only have one spare mag for Superman.”
“Bug out bag,” is all he said.
I glanced to the backseat once again and all I saw was the two rifles.  I looked to the floorboards and found a small black duffle behind my seat.  Unbuckling my seatbelt I reached over my seat and pulled the bag over to the front.
Unzipping it I seen two fifty round boxes of ammunition for my pistol.  Anyone who truly knows me knows I only carry one size, a .45mm.
“I guess it is play time,” I said, dropping the bag on the floor at my feet.
I separated the spare magazines from the box and began loading the AK rounds first.  First rule of thumb, always make sure the other guy is ready first.  Since the AK is his signature rifle I made sure my friend was ready to go when we got to wherever it was we were going.
I loaded what I assumed would be my magazines and put the box on the floor board next to the bag.  I could feel the tension coming from my friend as we continued to barrow down the highway at ninety miles per hour, weaving in and out between cars.
“Are you going to tell me who we’re going to play with?”
“They shot the skinny bastard,” is all he said.  That was all he needed to say.  And that’s how I ended up in this jail cell.