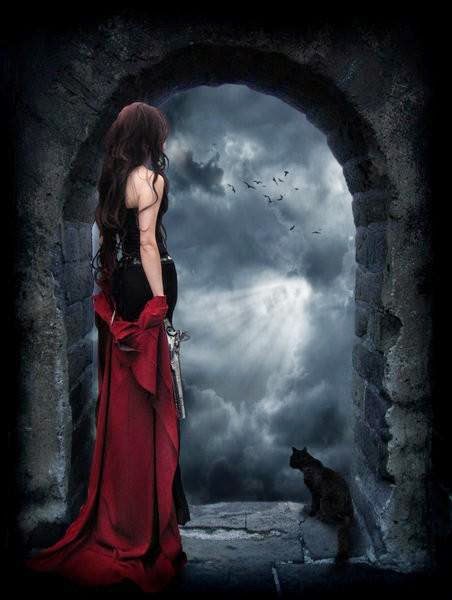 “It’s been said that when you die your life flashes before your eyes.  If that’s true then I die every night in my sleep.  Every time I close my eyes the nightmare begins again.  All the lives I’ve taken, all the faces, all the pleas for mercy, everything, it all comes flooding back.”
“I have often wondered if it’s true for those I’ve killed.  For those that died instantly without warning, was there a flash?  For those that died slow and very painful, was there a flash for them as well or was the pain to great, overshadowing the sins they were atoning for?”
“It’s a shame I will never find out.”
“Why do you say that,” a nervous voice answered, her hands chained to the stone wall behind her, she was unable to look away from the soft golden eyes staring deep into her soul.
“Because in seven thousand years I have yet to figure out how to truly die.”
“Is that what you’re going to do to me?  Kill me?”
“Why,” she asked with an evil grin, “have you done something that deserves me destroying your soul?”
“No,” the other woman snapped quickly.
“Yes you have,” she answered coldly.  “You have a stain on your soul so black that you want to die.  Otherwise you would not be here.”
The other woman looked away from those golden eyes, ashamed of herself as a memory flashed before her.
“You broke into this place to kill me,” she said as she lifted the other woman’s chin so she could look into her eyes once more.  “That was your first mistake, I can not die.  Your second mistake was thinking I am one of my children, who, unlike me, can be killed.”
She paused to let that statement sink in.
“Which one of my children were you trying to kill?”
“I wasn’t trying…”
“Come, come,” she snapped, cutting the other woman off.  “Lies will not be tolerated.  If you wish to become a Huntress, that is the first lesson you must learn.”
“Who… who are you?”
“I am Rosil,” the golden eyes woman answered.  “And I am the mother of all vampires.”
Horror flooded the other woman’s face at the word vampire.
“Relax my dear,” Rosil cooed.  “I am the mother of all vampires, I am not a vampire myself.”
“You lie,” the woman shouted, pulling against her chains, a renewed anger filling her. “I was right to come here and kill you.”
“And what a fine job you’ve done so far,” Rosil mocked.  “But I am not lying.  Have you forgotten the first rule of being a Huntress?  Lies will not be tolerated.”
Rosil looked down at the table next to her prisoner, drawing her eyes to the table as well.  There, spread out, were all weapons the woman had brought with her to the house.  A wooden stake, a plastic bottle filled with what Rosil assumed was Holy Water, and a machete.
“You do realize that none of this stuff will kill a vampire,” Rosil said, picking each item up, looking at it with disgust before setting it back down.  “Except this,” she picked up the machete.  “This will take a head off but it’s very messy and not very quick.”
“Why do I want to give a blood sucker a quick death,” the woman snapped.  “They all deserve to die slowly.”
“That they do,” Rosil answered softly, taking one last look at the machete before setting it back down slowly.  “But attempting to do so will only get you killed.”
“Why are you telling me this?”
“Because I am looking for a new apprentice and I see a fire burning deep inside you.  You have a desire to become a Huntress.”
Rosil drew her dragon katana and raised the blade to the woman’s neck.  The woman looked deep into Rosil’s golden eyes, the fear she displayed earlier gone.  She accepted her fate, she longed for death.
“That’s what I thought,” Rosil said with a smile.  She lifted the sword and tapped the chains, freeing the woman from the wall.  “What is your name?”
“Kara,” the woman answered.
“Kara,” Rosil repeated, “The Huntress.”
Posted by Max M. Power No comments: