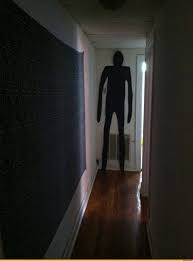 Last night there was a failed attempt of my abduction. Usually when they come I never know it until they return me. I am paralyzed, my body unable to move except for my eyes. I see them as shadow figures as they remove whatever it is they place on my head to keep me from moving. I attempt to scream but my vocal chords and mouth betray me. Only muffled screams can escape.

This is the moment I am awaken by my wife, telling me I was having a nightmare, except the nightmare was indeed, very real.

For some reason, whatever they normally do to paralyze me and keep me from remembering what happened to me did not work this time. I woke up, eyes wide open, and could see a single shadow moving down the hallway toward my bedroom.

The entity was tall and slender and had a nervousness to him. I was about to scream for my life when he quickly raised his long bony arm and pointed something at me. My body instantly froze. I was unable to make a sound. The only part of my body still working freely was my eyes.

I tried desperately to focus on the entity but all I could see was his shadowy silhouette. I managed to glance over to my wife and see she was sound asleep. Try as I might, I could not move.

The entity paced back and forth. He was making clicking sounds, the kind that dolphins make, as he spoke into some type of handheld box. I can only assume he was telling something that I was awake and that I could see his shadow. I could hear muffled transmitted clicking sounds coming from the device as he stopped pacing, facing my bedroom, and looking right at me.

He threw up his hands in defeat and faced me from the hallway, never crossing the threshold into my bedroom. He pointed his hand at me and vanished. My body was released and I fell back into deep slumber, unable to woke up from nightmare after nightmare, a parting gift from the entities.