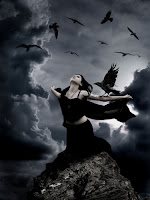 The cave was dark and cold. So deep is the darkness that natural light can not penetrate into it. The coldness radiated to the point Demetrius could feel it in his soul.
Demetrius needed the cold, longing for it. He wrapped it around him like a soothing blanket. The cold made Demetrius numb and he did not want to feel a thing. The pain of losing Sara was too great. Two weeks have gone by and still the pain remains, fresh as the day it happened.
By his own hand he had killed her. Demetrius knew that the woman he struck down was not the real Sara but instead Lilith in disguise. Still, Sara's fate was tied to Lilith's.
Azazel knew this too, that's why he sent Lilith to Demetrius. Azazel knew the pain of being betrayed by Sara would drive Demetrius insane. Azazel also knew that if Lilith was making herself into Sara that their souls would be linked. If Lilith died then so would Sara.
Demetrius' eyes began to glow red in the darkness. Anger for his brother began to consume him. Light began to fill the cave, every inch of darkness dying out to the light.
"You should try harder to control your anger."
Demetrius took a deep breath as he closed his eyes to concentrate. The powers he gained would take some getting use to.
"That's better. You don't want this cave to explode."
The light faded and the cave was once again thrown into darkness.
"I don't need your sarcasm Gabriel," Demetrius snapped. "I wish to be left alone."
"Raphael has given you plenty of time to be alone," Gabriel answered without pause. "I was sent to find you and bring you back."
"Raphael is no one to command me to do anything," Demetrius shouted through clenched teeth. "I'm done following him. He doesn't need me anymore, I already did his dirty work."
"It wasn't Raphael's dirty work to begin with," Gabriel snapped back as he sat on a rock in front of Demetrius. "You said it was Father who asked you to complete the final task. It was Father who showed you the future, a future you refuse to share with the rest of us. It was Father who made you into an Archangel."
"And now you are free to fight Azazel and his army on your own," Demetrius interrupted. "I started the war neither one of you were willing to start. I started Armageddon and it cost me my wife."
"We have all lost..."
"Really," Demetrius snapped, cutting Gabriel off as his anger began to grow again. "What have you lost brother? You can come and go to Heaven as you please. Kimberly remains safe in Heaven where she never has to see this war. so tell me brother, what have YOU lost?"
Gabriel sat in silence. There was nothing he could say that would ease Demetrius' pain. The light Demetrius' anger was producing began to fade once again. The two brothers sat in darkness for a while, letting the coldness wash over them.
"I have a plan for revenge," Demetrius finally whispered.
Posted by Max M. Power