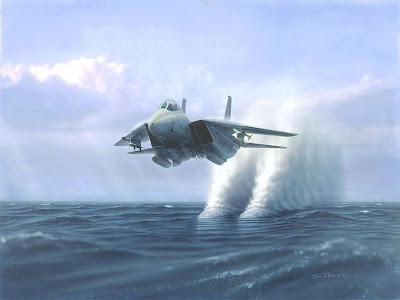 I was nine years old when Top Gun came out, the Navy’s two hour recruiting commercial. It wasn’t until the summer of ’89 that I seen the movie for the first time.
While all the girls at the time were drooling and falling in love with Tom I was falling in love a different Tom, the Grumman F-14 Tomcat. I watched the movie over and over, fast forwarding to the scenes that had a jet in it. It wasn’t long till I had the dogfights memorized.
Still playing with metal toys I bought a set of Navy fighter jets. After school and Saturday morning cartoons I would fly my jets around and around, going supersonic and breaking the sound barrier, turning on my afterburners so I can save the day.
As soon I was old enough I bought my first model. I was so excited that I could not wait to get home. I tore the box open and started popping out the parts I needed to build my very own F-14 model, with wings that rolled forward and back. I put it together, carefully painted the body and placed the stickers in the proper spots. When I glued the pilot into the front seat I knew that would be me one day.
I was told I was not smart enough, that I would never fly a Tomcat, but I refused to listen. I studied aviation; I played every video game involving flying. I pushed myself; I read and read and read. I knew it was going to be a hard journey but I wanted those Wings of Gold and I wanted them to be for the Tomcat.
One day in flight school I had finished a test early and went out into the hall to wait till class was over. I was looking at two favorite pictures hanging on the wall. One was an F/A-18C Hornet breaking the sound barrier. A circle of white surrounded the aircraft in the middle, showing where the barrier was broken. The other was the Tomcat flying above the surface of the ocean, causing two waves to splash up behind it, trying to catch up.
Imagining that was me, I was dreaming about flying low then pulling up slowly, climbing higher and higher into the sky, feeling freer than anything else alive. I knew that was the goal someday. My main flight instructor walked out of his office and seen me standing in front of the Tomcat.
“Too bad they just canned the Tomcat huh,” he said as he stopped behind me. “They just announced it this morning, no more Tomcats.”
My heart sank, I was crushed. The Navy would no long accept new pilots to fly the Tomcat. The F/A-18 Hornet was now the future of the Navy. Two weeks later a Tomcat landed at the airfield and taxied in as I was walking out to aircraft. I froze. I had never seen a Tomcat up close. The pilot could see the love I had for this aircraft. He allowed me to climb inside and sit in the pilot’s seat. I had touched my dream, however brief it may be.
Slowly over the coming years the Tomcat would be phased out and flew its last flight on September 22, 2006, the day the music died, well for me at least.
Posted by Max M. Power