How to save big money at Walmart

How would you like to start saving a lot of money at Walmart and have THEM pay the difference?
This started one morning a while back when I was buying lunch for work.  Hot Pockets at the time were $1.98 for the two pack.  Well someone last stock person saw an opening and shoved all the 12pk Hot Pockets under the $1.98 slot, with the price in large numbers on the isle.
Being the nice guy that I am, I took a picture of it and found a manager, showing them the mistake.  I said I was bringing it to his attention because I know it was wrong and he might want to fix it.  For trying to help I received a lot of attitude. I said screw it, and since I already had a picture, and he wasn’t in a hurry to fix the problem I bought the box and made them MATCH the price listed.
I see this all the time at numerous Walmarts all over the city.  Walmart continues to hire people too lazy to do their jobs.  I had one manager tell me that’s why they have price check machines for, if it’s in the wrong spot, go check the price yourself. Really?  That’s the response you want to go with?
The final straw for me was two weeks ago when I needed to buy dog food.  I always buy the 40lb or 50lb bag, which ever they have.  I know what the regular 50lb bag cost and when they have it I like to buy the Meaty Chunks & Gravy.  I figure if a 20lb bag cost $10.98 then the 40lb bag should be less than $20 because it gets cheaper in bulk.
I saw they had three bags of the 40lb bags in stock so I look at the price and it was $17.98 so naturally I grabbed it and off I went.  Dumbass me didn’t watch the price as it rang up and when I got home I looked over the receipt and saw it cost me $31.98. 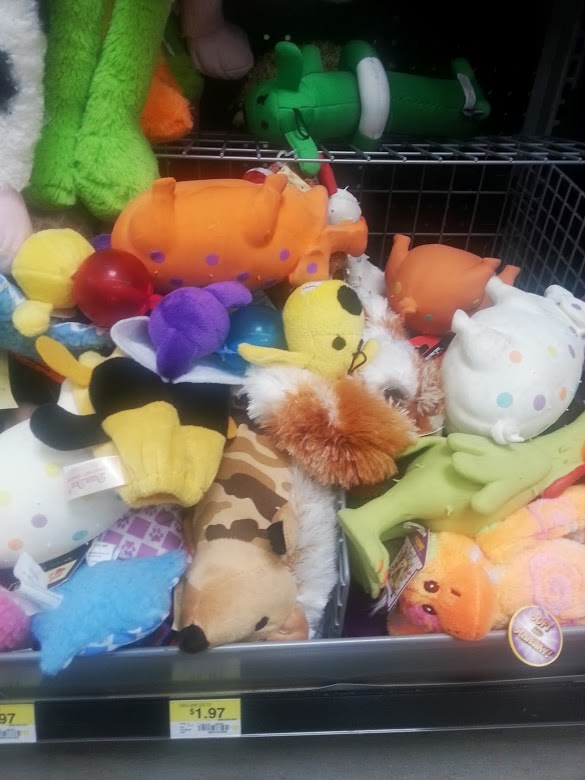 This morning I needed to get a few more items for my dog.  This time, armed with my camera phone I took pictures off the products I wanted.  One picture was of the entire area and the other was of the price where it was listed before I grabbed the item.  At the register is where my plan of action came into play.
Two items, that I already know the price of and the listed price was WAY off the mark.  Let’s start with the dog toys.  The pigs you see in the picture cost about $5 total with tax.  Clearly you can see more than one in the picture in a bin marked $1.97.  I got two of the four in the picture shown.  There were actually a total of eight in the bin.
Next is the metal post that screws into the ground.  That post alone is about $8.  Add the cable that comes with it and the cost is $11.  Clearly you can see it’s thrown under a price of $3.50.  There are more than one visible on that hanger.  On a hanger above it and to the left side of that hanger is more post with cables under price tags of $3.50. 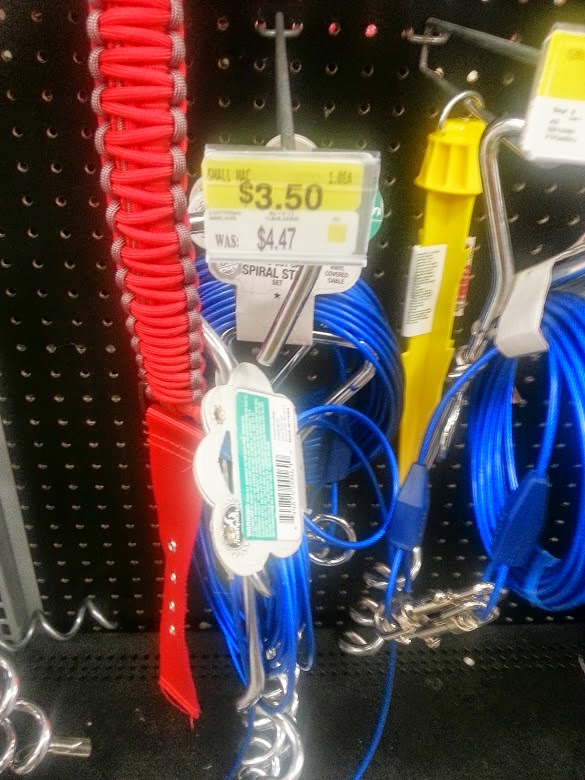 At check out the manager told me that I would have to pay regular price because someone clearly put the items in the wrong place.  My response, “That’s the advertised price.  If it was just one item in the wrong spot I might say a customer put it there but CLEARLY this was your employee’s laziness that did this.”
He said he could not give it to me for the price in the pictures.  I offered to sue for false advertising and since Walmart is considered “DEEP POCKETS” by most lawyers I’m sure I could find one to take my case.  That changed his mind in a heartbeat.
It’s time Walmart starts taking responsibility for the actions of their employees.  If they wish to hire people who refuse to do their jobs properly then it’s time my frustration ends.  As a consumer I should NOT have to look up my own prices if the item is marked wrong.  So all of you with a smart phone, arm yourselves, when you see something you want CLEARLY marked wrong or thrown in the wrong spot take a picture and demand you get the product at the listed lower rate.  Walmart just lost $20 to me this morning and that $20 feels good in my account.
Posted by Max M. Power No comments: